Jenny can give a blow-job in the car like a any real bi-atch! 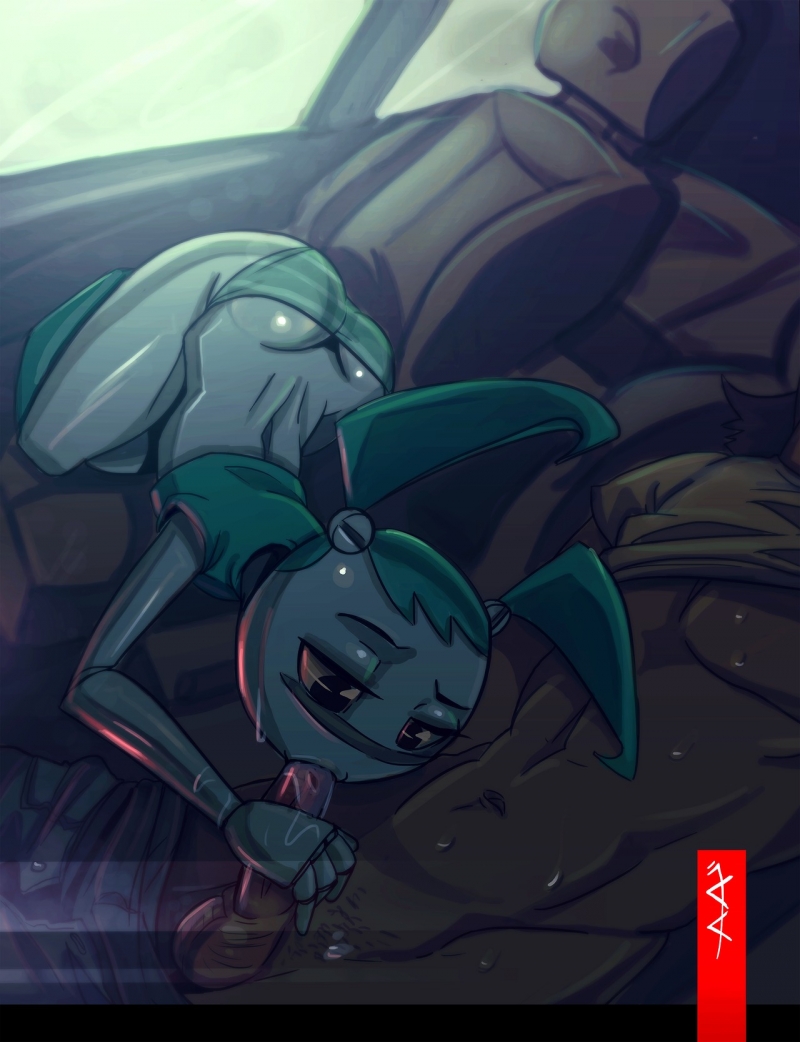 The battered royal hover-limousine limped to a landing only a block away from the raging firefight at Slave Factory Forty-Six. Queen Vexus flew out of the hole in the roof and glided towards the battle scene, with her Black Mantis bodyguards scrambling to keep up with her. A demonic snarl marred the queen’s face as she approached a hastily arranged command post, wondering how much more grief XJ-9 could possibly cause her today. Two hundred roach-drones had already surrounded the twenty-story building where Jenny and the slaves were holed up, and the access roads leading to the factory were filled with military transports and hover-tanks. In the background, she could see a torrent of laser bolts screeching back and forth between her drone soldiers and the rebelling slaves. And fighting at the humans’ side was an infuriatingly stubborn teenage robot, with her arms transformed into a pair of fifty-millimeter cannons. Vexus shook her head and groaned; it was time to put a stop to this little uprising.

END_OF_DOCUMENT_TOKEN_TO_BE_REPLACED

A swarm of Skyway Patrol aircars circled frantically around the massive Cluster starship, as it edged closer to the shores of Australia. They were trying in vain to slow down the juggernaut that was about to lay waste to the city. The curved hull of the gargantuan, insect-shaped vessel bristled with hundreds of lasers and particle beam weapons, forcing Skyway Patrol pilots to keep their distance. Military jets screamed in from the north, unleashing a barrage of air-to-air missiles at the starship. Only a fraction successfully hit their targets, and even then, the ship’s hull was protected by heavy armor. The Cluster was going to be within firing range of Sydney within minutes, and Skyway Patrol couldn’t stop it.

END_OF_DOCUMENT_TOKEN_TO_BE_REPLACED

The quartet of Cluster locusts pulled into a climbing turn, preparing to make another strafing attack on the largest of the downtown skyscrapers. Their long, swept-back wings and streamlined bodies were built for speed. This one group of locust-bots packed more firepower than a squadron of Skyway Patrol aircars and there were one hundred and ninety-six others just like them swarming through the skies over Sydney. Their antennae flexed to take aim at another target, and glowed with the readiness of a full laser charge. The attack locusts turned towards the skyscraper

And bellowed into brilliant, fiery explosions as a series of bright blue laser flashes ripped through their metallic abdomens. Jenny shot through the airborne debris like a missile, with both laser-limbs deployed, anxiously trying to keep track of all the robots in the air. For now, the locusts seemed focused on causing senseless destruction and mayhem in the city below. But they wouldn’t ignore her for much longer; she needed to make the most of her advantage.

END_OF_DOCUMENT_TOKEN_TO_BE_REPLACED

Jenny stood atop a new pile of robotic debris, made from the
leftovers of Cluster locusts that shed just destroyed in combat.P Three more giant metal insects stared up at
her from the middle of the street, and converted their front pincers into
beam-type weapons.P She heaved her
shoulders and raised her fists, weary from battle, yet optimistic.P Two hundred Cluster locusts had attacked
Sydney a few minutes ago; her sensors told her that these three were the last
ones left.

The locusts split up to attack her from different
directions; one circled around to the left, and one circled around to the
right.P The middle locust leapt high
into the air, and dove straight for her. PHis front claws protruded forward, and crackled with bolts of high
voltage, preparing to fire a paralyzing blast of electrons at her.P The locust on the left charged.P The locust on the right charged.P They timed their attack perfectly, all
arriving right on top of her at the same moment

END_OF_DOCUMENT_TOKEN_TO_BE_REPLACED

Chapter Ten The
Burden of Responsibility

Queen Vexus eased back and settled into the pillows on her
favorite couch – the long one, made from luxurious platinum, covered with a
purple metallic silk.P A small entourage
of robot servants was fawning over her, tending to her every need.P A young robot girl bowed reverently, holding
a gold-trimmed chalice filled with fine imported lubricant; a pair of
maintenance droids worked quickly and silently, polishing and buffing her right
forearm.P Vexus enjoyed one more sip of
lubricant, then waved her hand to the imposing insectoid warriors who composed
her Royal Guard.P They responded with a
quick bow, then pulled open the giant stainless steel doors that led in from
the grand hallway.

END_OF_DOCUMENT_TOKEN_TO_BE_REPLACED

Now Jenny is a gothic gal with fat glossy butt! 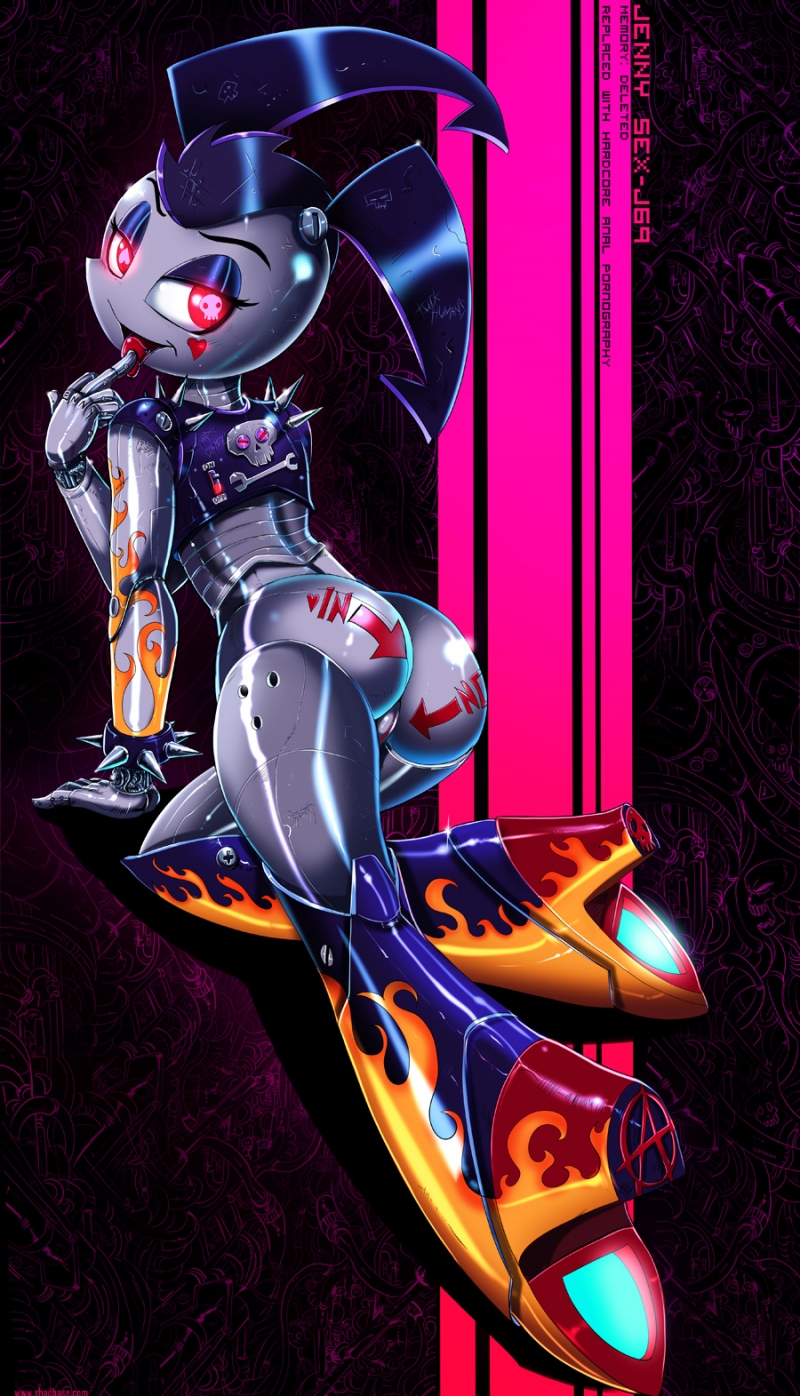 Sheldon beamed with satisfaction, enjoying the utter
astonishment on every face in the gym. He walked arm in arm with Helena through
the crowd.P All eyes were riveted on his
supermodel-class date; the boys with drool practically flowing off of their
chins, the girls with seething fires of jealousy in their eyes.P Quite remarkable, he thought to
himself, but ultimately unimportant.P
After all, Im only interested in one girls reaction here tonight.

A tall, handsome senior from the football team swaggered up
to them, looking down at Sheldon with contempt.P He flipped the lapel of Sheldons jacket with a sneer.P Get a load of dorkmeister here, guys, he
chortled.P His mommy dressed him up,
and he thinks hes hot stuff!

END_OF_DOCUMENT_TOKEN_TO_BE_REPLACED

Obvious Disclaimer The characters in this story are from
the cartoon My Life as a Teenage Robot and I am blatantly stealing them!P Blatantly, I say!P My sole creation is the character of Drew, a human high school
student who was accidentally turned into an android by Cluster
nanotechnology.P Its explained in my
first story Android Scam.

Id like to give special thanks to everybody whos ever
submitted a review to one of my stories.P
Theyre really appreciated, and theyre real morale boosters when youre
wondering whether anybody is actually reading these things.

One more quick note, as an experiment, Im going to try
writing shorter chapters, which means therell probably be more of them.P Hopefully this will make the story easier to
read.

DIAMONDS ARE A
ROBOTS BEST FRIEND

END_OF_DOCUMENT_TOKEN_TO_BE_REPLACED

Diamonds Are a
Robots Best Friend

The light was dimming in the overcast evening hours, and a
faint breeze was picking up, scattering scraps of paper across the concrete
roof of the Marquis Diamonds building.P
Far above the streetlights, the rooftop was blanketed in dark gray
shadows.P All was silent, except for a
few muffled grunts coming from the direction of the alleyway.P Then with a soft clank, first one,
then two silver-green claws flung themselves over the wall, and morphed into
sturdy clamps.

Finally, Drew said, relieved to be finished with the
four-story climb.P Not that it had been
especially tiring or difficult, but it was the first time hed ever tried
something like that with someone hanging onto his back.